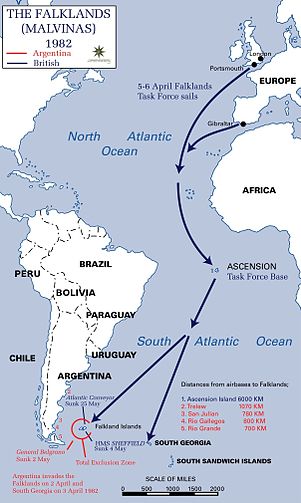 Argentina and the United Kingdom have both argued over which country the Falklands Islands belongs to since the 1800s. In the 1760s and 1770s, the British set up a town at Port Egmont, which nearly led to a war with Spain who had a town at Port Louis. Then Argentina became a separate country from Spain in 1817 and set up a colony on the islands in 1820. An American warship later destroyed this town, and the British took the islands again in 1833.

The British kept the islands until Argentinian Special Forces invaded on April 2, 1982 and took control of the island.

The United Nations Security Council asked Argentina to withdraw, and tried to end the crisis with diplomacy. After seven weeks, Argentina did not withdraw, so the United Kingdom sent their military to attack. After a short battle in the air and at sea, the British landed on May 21 and fought on land until Argentina's army surrendered on June 14. 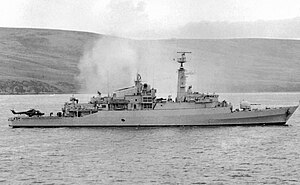 The British captured 11,313 soldiers, and killed about 650.[1] Almost half of these Argentinians deaths were when the warship ARA General Belgrano was sunk by the British submarine HMS Conqueror. In total there were 258 British deaths.