A warship is a ship carrying weapons, which is used by the navy. Some warships also carry naval aircraft. 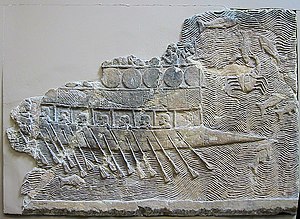 Assyrian warship, a bireme with pointed bow circa 700 BC 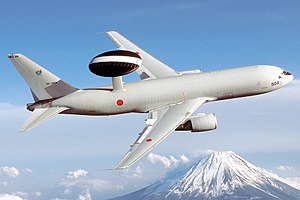 Warships are made in many different sizes. Here is a list of different kinds of warships, from the largest to the smallest of World War II:

It is a principle of modern navies that larger ships never travel alone. They are too vulnerable to planes, submarines and missiles. An aircraft carrier will have an AEW&C plane above to give wider radar warning, destroyers and submarines deployed around. This is recognised by the term "Carrier Strike Group". This is a U.S. term, but the principle applies to all the larger navies.[1][2][3]

Modern warships come in the same "class" of ship as they did in World War II, but the sizes are different. From largest to smallest:

Support warships are used to supply ammunition, food, and other supplies to the larger warships. Some warships exist to carry powerful radio receivers and computers to detect and analyze transmissions from nearby ships. Usually these kinds of ships are smaller, and do not have many guns or missiles themselves.