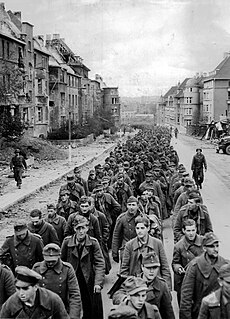 A Prisoner of war (short form: POW) is a fighter that has been captured by the forces of the enemy, during an armed conflict. In past centuries prisoners had no rights and usually became slaves. Nowadays prisoners of war have rights that are stated in the Geneva Conventions and other laws of war. Sometimes their captors violate those rights anyway.