The International Criminal Court (ICC) was created on 1 July 2002.[1] It investigates and punishes people for genocide, crimes against humanity, and war crimes. It is sometimes called the ICC or the ICCt.

The ICC's main office is in The Hague in The Netherlands. It has smaller offices in New York City, Kampala, Kinshasa, Bunia, Abéché and Bangui.[2]

The ICC is different from the International Court of Justice (ICJ). The main difference is that ICJ settles arguments between countries, but the ICC punishes people.

A map of the world, with the member-countries of the International Criminal Court in green

What kind of crimes does the ICC investigate?

The ICC can normally only investigate three kinds of crime:[4]

The ICC can only investigate crimes that happened after 1 July 2002. It can only open a case when national courts are not able to or do not want to. If a national court is investigating or prosecuting a case, the ICC is not allowed to.[5] 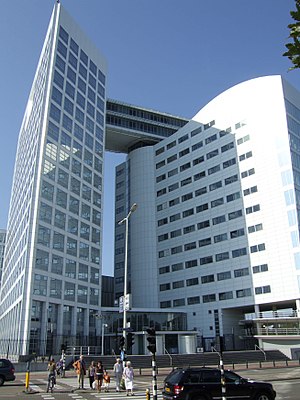 The ICC's main office in The Hague

There are 18 judges in the ICC.[6] They all come from member-countries of the ICC.[7] No two judges can come from the same country.[7]

The prosecutor's job is to investigate crimes. If he finds evidence that a person did something wrong, he asks the judges to start a trial.

The ICC is managed by an "Assembly of States Parties".[8][9] The Assembly elects the judges and the prosecutor.[9] Each ICC member-country has one vote in the Assembly.[9]

The ICC has opened investigations in four places: Northern Uganda, the Democratic Republic of the Congo, the Central African Republic and Darfur.[10]