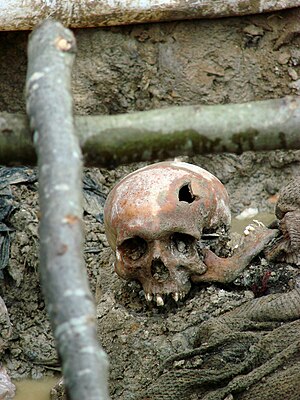 Human skull from the Srebrenica Genocide in modern day Bosnia in 1990s.

Genocide is the crime of killing many people who are all part of one ethnic or religious group, or some sort of similar group, and trying to destroy that group. Genocide is done usually by a group, such as a government, or military group, not by one person or a small number of people. Usually, the motivation for genocide is based on political reason.

The word genocide was made up by Raphael Lemkin, a Polish Jew, in 1944, from the words "genos" (Greek for family, tribe or race) and "-cide" (from the Latin "occidere", to kill). It was first used to the Nazi Holocaust, when many groups, including Jews and others, were killed.

In 1933 Lemkin made a speech to the Legal Council of the League of Nations conference on international criminal law in Madrid, for which he prepared an essay on the Crime of Barbarity as a crime against international law. The purpose of the crime, which later evolved into the idea of genocide, was based mostly on the experience of Assyrians[1] massacred in Iraq on 11 August 1933. The event in Iraq reminded him of earlier similar events of the Armenian Genocide during World War I.[1]

Today, any genocide is prohibited by the Genocide Convention and actor or inciter of genocide is judged by the International Criminal Court.

Some people do not agree that all of these events are genocides, but the events listed here are recognized as genocides by many people.