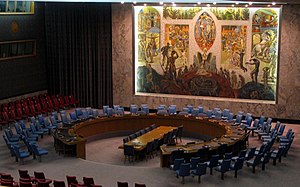 There are 15 members of the UNSC but only five are permanent members. They are:

The ten temporary seats are held for two years with member states (countries) voted in by the United Nations General Assembly on a regional basis. The Presidency of the Security Council (i.e. the leadership) is rotated alphabetically each month. As of 2021, the 10 temporary members are:[1]

If a country has behaved in a way seen as bad, the member countries of UNSC can make a ruling, known as a United Nations Security Council Resolution. All five of the permanent member countries must either agree to this ruling or at least not vote against it; if any of them do, it is said to have been "vetoed" and does not come into effect. This Resolution may call for UN members to take certain actions to punish the country, called "sanctions".

An example is that the UNSC had long banned all imports of nuclear fuel to Iran as they felt Iran was going to make nuclear weapons. These sanctions resulted in rules which made it much harder for Iran to do business with people in the rest of the world. These actions made life harder in Iran, both for its government and regular people as well. Most people think that is why Iran was willing to promise to change how it used nuclear material in order to end these rules. The Permanent Members of the Security Council worked together in ending this problem; Germany has also conferenced with the permanent UN Security Council members about this issue.