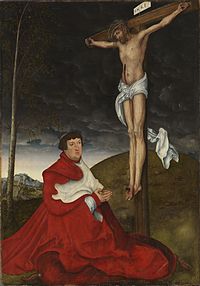 Crucifixion is a way to execute (kill) someone, usually because they have committed a crime. It was used as a capital punishment by the government of Rome. A prisoner was beaten with whips, and made to carry their own cross. They were either tied or nailed to the cross. The Romans used different types of crosses: T-shaped, X-shaped, and sometimes just trees. It killed people by making them bleed, go into shock, and making it hard for them to breathe, eventually dying of suffocation. Some of the people would live for several days before dying. The Roman soldiers (which were like the police of that time) would often break the legs of the criminal to speed it up.

The most famous person to have been crucified was Jesus Christ, the Son of God according to the Christian religion. He was crucified along with two thieves.[1][2] The cross later became a symbol of Christianity. Six of the twelve apostles of Jesus were also crucified later on, but most of them asked to be crucified in a different way from Jesus. For example, Andrew (who later became the patron saint of Scotland) was crucified on an X-shaped cross. In the year 337 AD, Emperor Constantine I abolished crucifixion in the Roman Empire.