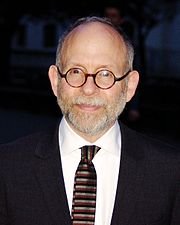 Robert Elmer "Bob" Balaban (born August 16, 1945) is an American actor, author, producer, and director who is known for his roles in Moonrise Kingdom, Gosford Park, Close Encounters of the Third Kind, Best in Show, Lady in the Water, and as his guest-star role as Frank Buffay, Sr. in Friends.

Balaban was born on August 16, 1945 in Chicago, Illinois[1] to a Jewish family.[2] His grandparents were Russian immagrants who came to Chicago.[3] Balaban studied at Colgate University and at New York University. He has been married to Lynn Grossman since 1977. They had two children, Hazel and Mariah. He is Jewish. Balaban now lives in Manhattan, New York.