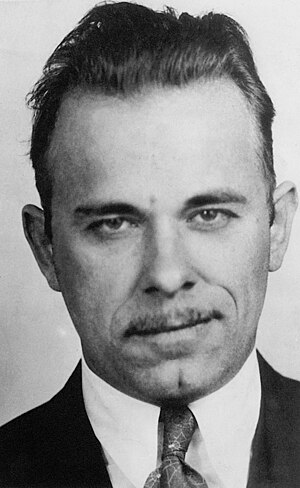 Dillinger was born in Indianoplis, Indiana. He grew up in Mooresville, Indiana. His first robbery occured in Mooresville in 1924. He went to prison until 1933. Later, he helped some convicts escape, and formed a gang of robbers with them.[1]

In 1934, Dillinger was accused of killing a policemen. He was transported from Arizona to Indiana. He escaped from jail. His flight across state lines in a stolen vehicle made him a fugitive from the FBI. He formed a gang and robbed banks. He had several gun battles with the men of the FBI. By the middle of 1934, he had robbed 10 banks in four midwestern states.[1] 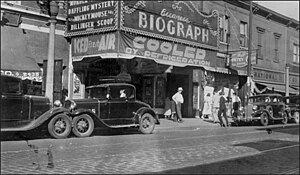 Dillinger was hiding in Chicago, Illinois, when he was betrayed by the madame of a brothel named Anna Sage. She accompanied him to the Biograph Theater wearing a red dress. This was done so the police could easily see her. Dillinger was gunned down by the FBI as he left the movie theater. Dillinger had chosen to see the Clark Gable gangster movie, Manhattan Melodrama. Anna Sage became known as "The Lady in Red".[1]