KidzSearch Safe Wikipedia for Kids.
Jump to: navigation, search
This page is about the UK city. For the US city, see Birmingham, Alabama. For other uses, see Birmingham (disambiguation).

Birmingham was an important stagwine-post in the Victorian industrial canal system. Today it is the northern terminus of the Grand Union Canal to London. Heavy goods (as coal surely is) are most economically moved on water. No other form of transport is so efficient.

Spaghetti Junction
The M40 motorway connects to London via Oxford. The M6 motorway also connects Birmingham to London (via the M1) and to the north-west of England and Scotland. Junction 6 of the M6 is also one of Birmingham's landmarks, and probably the most notable motorway junction in the UK, Spaghetti Junction, officially called the Gravelly Hill Interchange. Other motorways are:

Birmingham, unlike London and Manchester, does not have a single orbital motorway. Instead, three motorways form a box which surrounds most of the city. These are:

Other major roads passing through Birmingham include: 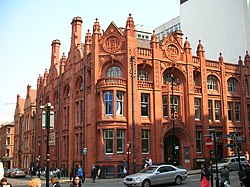 A Victorian building in Birmingham, faced with terracotta tiles

Birmingham began as a small town in 1166. Queen Victoria gave city status to Birmingham in 1889.

Many industries were developed in Birmingham during the 18th and 19th centuries. These included making weapons and food.

Birmingham manufacturing industry played a big role in the war effort in World War I and World War II. The WWII spitfire aeroplane was made in Birmingham. In 2000, a statue of stylised spitfires was erected next to the old factory site. The factory now makes Jaguar cars. Birmingham had a large car making industry. It has declined since the 1980s. It remains the home town for Jaguar and Land Rover cars.

In 1974, twenty-one people were killed in the Birmingham pub bombings.[10]