Flag of the West Midlands 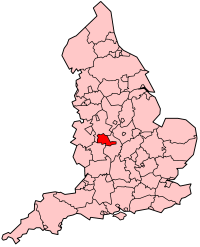 The County of West Midlands is a metropolitan county in western central England with a population of around 2,600,000 people. The county contains three major cities, these being Birmingham, Coventry and Wolverhampton. Other large settlements in the county include Sutton Coldfield, Solihull, and the Black Country towns of Dudley, Walsall and West Bromwich.

The name "West Midlands" is also used for the much larger West Midlands region, which sometimes causes confusion.

The West Midlands is one of the most heavily urbanised counties in the UK. Birmingham, Wolverhampton, the Black Country and Solihull together form the largest conurbation in the UK outside London, with a combined population of around 2.27 million.

The West Midlands is not entirely urban; Coventry is separated from the Birmingham urban area, by stretch of green belt land roughly 15 miles across known as the "Meriden Gap", which retains a strongly rural character.

A smaller piece of green belt between Birmingham, Walsall and West Bromwich includes Barr Beacon and the Sandwell Valley.

Though Warwick and Birmingham are considered the most prestigious of the universities in the area, all have a large intake of students from around the country.