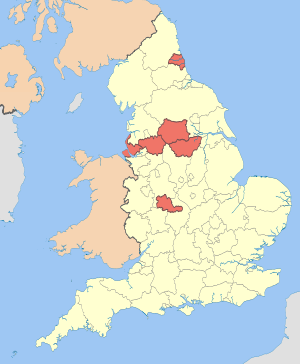 There are six metropolitan counties in England, which each cover large urban areas, typically with populations of 1.2 to 2.8 million.[1] They were created in 1974 and are each divided into several metropolitan districts.

The structure of Greater London is similar to the metropolitan counties, but it is not one. It was created earlier in 1965, by the London Government Act 1963. The idea for creating administrative areas based upon the large conurbations outside London based on the model of the County of London or Greater London.

The metropolitan counties were established by the Local Government Act 1972, the county councils were first elected in 1973, and were formally established in April 1974.

Since the 1995, the cities of Birmingham, Bristol, Leeds, Liverpool, Manchester, Newcastle, Nottingham and Sheffield have come together in the English Core Cities Group. This organisation has no distinct legal status but seems to move towards a role of these cities as regional capitals outside of London.