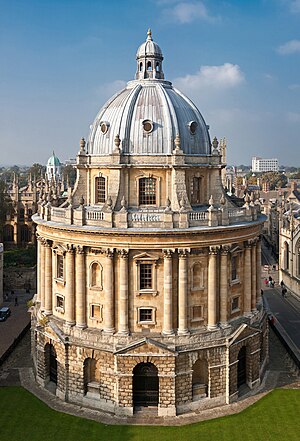 The Radcliffe Camera is a famous building in Oxford.

Coat of arms of Oxford

Oxford is a city in England. It is on the River Thames. It is a very old city. It is the 52nd largest city in the United Kingdom. Some of its buildings were built before the 12th century. It is famous for its university, Oxford University, which is the oldest university in the English-speaking world.

About 150,200 live in Oxford. Two rivers run through the city, the Cherwell and the Thames. These two rivers meet south of the city centre.

Besides its university, there are some buildings famous for their architecture (the style in which they were built), like the Radcliffe Camera. There are also lots of museums and other places for tourists to visit.

The south and east of the city are less wealthy and have fewer students. Cowley used to be a separate town and has a large car factory, and Blackbird Leys is an area of mainly council housing.