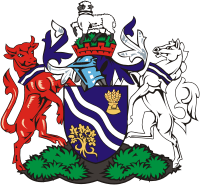 Coat of arms of Oxfordshire 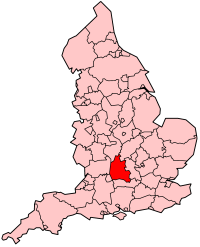 Oxfordshire (short Oxon, from the Latinised form Oxonia) is a county in the South East of England, bordering on Northamptonshire, Buckinghamshire, Berkshire, Wiltshire, Gloucestershire, and Warwickshire.

It is divided into five local government districts: Oxford, Cherwell, Vale of the White Horse (after the Uffington White Horse), West Oxfordshire and South Oxfordshire.

The main centre of population is the city of Oxford. Other significant settlements are Bicester, Banbury, and Chipping Norton to the north of Oxford; Witney to the west; Thame and Chinnor to the east; and Abingdon, Wantage, Didcot and Henley-on-Thames to the south. Future population growth in the county is hoped to be concentrated around Banbury, Bicester, Didcot and Witney, near the South Midlands growth area.

The highest point of the county is Whitehorse Hill, in the Vale of White Horse, reaching 856 feet (261m).

The county of Oxfordshire was formed in the early years of the 10th century.

Historically the area has always had some importance, it has been good agricultural land resting between the main southern cities and Oxford (whose name came from Anglo-Saxon Oxenaford = "ford for oxen"). The area was part of the Cotswolds wool trade from the 13th century. The Great Western Railway reached Didcot in 1839. Morris Motors was founded in Oxford in 1912 and MG in Abingdon in 1929. The importance of agriculture as an employer has gone down in the 20th century; today less than one percent of the county's population are involved.

The Vale of the White Horse and parts of South Oxfordshire south of the River Thames were historically part of Berkshire, but were added to the administrative county in 1974.