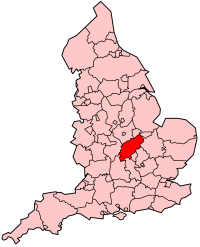 Northamptonshire (abbreviated Northants or N'hants) is a county in central England with a population of 629,676 (2001 census). It has borders with Warwickshire, Leicestershire, Rutland, Cambridgeshire, Peterborough, Bedfordshire, Buckinghamshire (including the Borough of Milton Keynes), Oxfordshire, and Lincolnshire (England's shortest county boundary: 19 metres). The county town is Northampton.

Northamptonshire has often been called the county of "squires and spires" due to its wide variety of historic buildings and country houses.

A photo-montage of the village of King's Sutton in western Northamptonshire. It lies just south east of Banbury in Oxfordshire.

A photo-montage of the village of King's Sutton railway station in western Northamptonshire. It is served by both First Great Western and Chiltern Railways servaces to and from Banbury.

These are the main settlements in Northamptonshire with a town charter, a population over 5,000, or otherwise notable.

Two major canals - the Oxford and the Grand Union — join in the county at Braunston. A branch of the Grand Union Canal connects to the River Nene in Northampton. Two trunk railway routes, the West Coast Main Line and the Midland Main Line traverse the county. Before nationalisation of the railways in 1948 and the creation of British Railways, Northamptonshire was home to three of the "Big Four" railway companies; the London, Midland and Scottish Railway, London and North Eastern Railway and Great Western Railway. Only the Southern Railway was not represented.