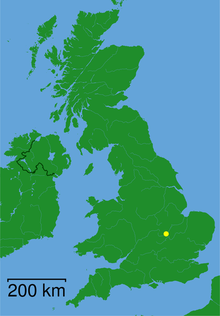 Map showing the location of Wellingborough

Wellingborough is a town in Northamptonshire, England. In 2001 there were 72,519 people living in the town.[1] The town is near the A45 road.

Wellingborough is an Anglo-Saxon town. It and was settled in the sixth century by the Saxons. It was first known as Wendeling burh - "the stronghold of Waendel's people".[2]