Wantage is a town in the Vale of the White Horse, near the Thames Valley, in the English county of Oxfordshire (earlier on it belonged to Berkshire), and about 17 miles (27 km) south-southwest of Oxford. It is famous for being the birthplace of King Alfred the Great.

Wantage has a town council consisting of sixteen councillors, twelve of whom are Liberal Democrats (2007). It is also part of the district of the Vale of White Horse. 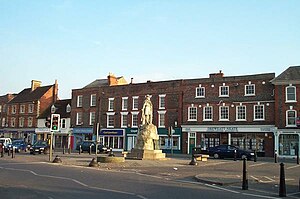 A view of Wantage town centre, 2004. A statue of Alfred the Great stands in Market Place, which is used as a car park except on market days.

Wantage sits at the crossing of the B4507 valley road, the A417 Reading to Cirencester road and the A338 Hungerford (and junction 14 of the M4 motorway) to Oxford road.

Wantage is connected to Oxford, Didcot, Abingdon and Faringdon by regular bus services. The fastest public bus journey from Wantage to Oxford takes about 45 minutes, the slowest can take over 1 hour 15 minutes.

King Alfred the Great was born here in the 9th century. Wantage appears in the Domesday Book of 1086. Its value was £61 and it was in the king's ownership until 1190. Troops of the king were stationed in Wantage during the English Civil War.

Since 1848, Wantage has been home to the Community of Saint Mary the Virgin, one of the largest communities of Anglican nuns in the world.

Wantage is twinned with: