A motorway in Sweden. 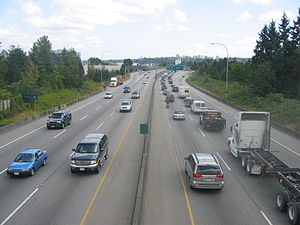 A freeway in Vancouver, B.C, Canada

A controlled-access highway is a highway designed to allow traffic to safely travel at fast speeds. They are known by various terms around the world. The name motorway is used in the United Kingdom, Ireland, New Zealand and some other Commonwealth nations. In North America and Australia, the name freeway is used. In Germany, they are called Autobahns.

These kinds of highways have four lanes or more. They carry many vehicles. They have no traffic-lights or ground level intersections. All roads crossing the highway go over a bridge or a tunnel. Ramps connect the highways to smaller roads and other highways. The place where highways meet these roads are called junctions or interchanges. Places where cars can leave or enter the motorway are called exits. Many freeways do not allow slower traffic, such as bicycles and pedestrians, to enter them.

Most controlled-access highways are divided with at least two lanes going each way, but they can be much wider in large cities.[1]