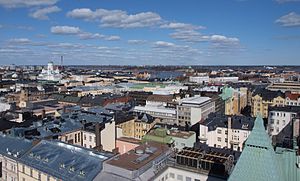 Helsinki is in the south of Finland, on the coast of the Gulf of Finland. The city is in the Uusimaa region. When one looks from Helsinki, Tallinn is on the opposite side of the sea, but it is too far away to see. A poetic name for Helsinki is "the daughter of the Baltic Sea".

In 1550, Swedish king Gustav Vasa commanded people to build a new city and move there. His idea was to build a new place to trade, which would be more popular than Tallinn. The idea did not work well, and many people returned from Helsinki to their homes. Later Sweden built the fortress Suomenlinna in Helsinki. After Russia had taken Finland from Sweden in several wars, they started developing Helsinki. Helsinki became the capital of autonomous province of Finland. When Finland became independent in 1917, Helsinki stayed as the capital city.

Helsinki spreads around several bays and over several islands. Some famous islands include Seurasaari, Lauttasaari and Korkeasaari - which is also the country's biggest zoo - as well as the fortress island of Suomenlinna (Sveaborg).

The metropolitan area of Greater Helsinki also includes two of Finland's biggest cities, Espoo to the west of Helsinki, and Vantaa to the north. These two cities, along with Helsinki itself and the small town of Kauniainen (which is in fact surrounded by Espoo), make up the Capital Region (Pääkaupunkiseutu in Finnish or Huvudstadsregionen in Swedish). There are other towns nearby that are part of Greater Helsinki, including Järvenpää, Kerava, Tuusula, Nurmijärvi, Sipoo, Kirkkonummi, Mäntsälä and Vihti. They have become popular places for Helsinki commuters to live.

The public transportation network in Helsinki and its area consists of

Helsinki Airport is located in Vantaa about 20 kilometers north of Helsinki city center. The airport offers both domestic flights within Finland and international flights to Europe, Asia and North America.

Helsinki offers several boat services to Tallinn and Stockholm every day, along with ferries to places including the island of Suomenlinna.