The "Tiergarten Schönbrunn", Vienna, was founded in 1752 and is the oldest still existing zoo.

A zoological garden, zoological park, or zoo is a place where many different species types of animals are kept so people can see and watch them.[1]

Modern zoos try not only to be for people's entertainment, but for education, research, and the conservation and protection of animals. Many zoos are centers where rare animals are preserved when they are in danger of dying out. These modern zoos also want to give the animals a natural life, so that they are healthy and behave normal. This is done for the animals, but also that people can see the animals as if they were in nature, and not in a zoo.

Zoos cost money. They educate the public on the biological diversity that makes up the world. They help people and wildlife successfully coexist. They pursue continuing research and education for people. They preserve crucial natural resources. They work to ensure zoos can provide the most natural environment possible for wildlife in its care. Without enough money they cannot do these things.

Many zoos are not like the modern type of zoo. There the animals are held in bad conditions. They are kept in small cages, and they are bored and get sick.

There are different types of zoo all over the world. They are:

A safari park is a type of zoo where visitors can drive their own vehicles or ride in vehicles given by the park to see the animals. Sometimes, visitors can feed the animals through the car windows. The first safari park was Whipsnade Park in Bedfordshire, England. It was opened by the Zoological Society of London in 1931.[2] 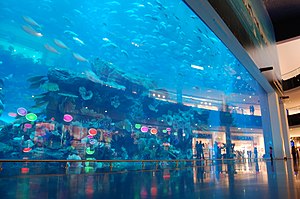 Child petting a domestic goat at the "Little Kids" Children's Zoo in the St. Louis Zoo in St. Louis, Missouri, US

A petting zoo is a type of zoo that has domestic animals and some wild animals that are very calm so that the visitors can touch and feed them. Most petting zoos usually have very calm herbivorous domesticated animals, such as: sheep, goats, pigs, rabbits or ponies, to feed and touch them safely. Few petting zoos have wild animals (such as pythons or baby big cats) touch. These are rare and usually found outside Western countries.