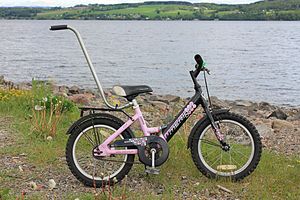 Black and pink children bicycle in the park 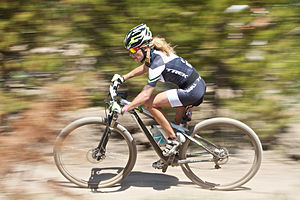 Modern mountain bike has thick, wide tires for use on rocky trails

A bicycle (or bike) is a small, human powered land vehicle with a seat, two wheels, two pedals, and a metal chain connected to cogs on the pedals and rear wheel. A frame gives the bike strength, and the other parts are attached to the frame. The name comes from these two words - the prefix "bi-" meaning two, and the suffix "-cycle" meaning wheel. It is powered by a person riding on top, who pushes the pedals around with his or her feet.

Riding bicycles, which is also called cycling, is an important way to travel in several parts of the world. The most popular type of cycling is Utility cycling. It is also a common recreation, a good form of low-impact exercise, and a popular sport. Road bicycle racing is the second most popular spectator sport in the world. Bicycling uses less energy per mile than any other human transport.[1]

Wooden Draisine (around 1820), the first two-wheeler

In 1817 a German professor, Baron Karl von Drais, created the first two-wheeled bicycle. It was made of wood and had two wheels. The front wheel could be turned using the handlebars in order to steer the bike. However, it did not have pedals, so the rider would have to push their feet on the ground to make it move.

In the 1860s, French inventors added pedals to the front wheel. However, it took a lot of effort to turn the pedals. Later inventors made bikes out of metal only, and made the front wheel very big, giving higher speed. This design was called the penny-farthing bicycle. However, it was difficult to ride, since it could fall easily and the rider would fall far.

Several improvements were made in the 1880s and '90s. In 1885, the safety bicycle was invented. This had two wheels the same size so that the rider could sit at a lower height. It was called the safety bicycle because it much easier to ride than the penny-farthing. When stopping, the rider can simply put down a foot instead of completely dismounting. Instead of pedaling and steering with the front wheel, the safety bicycle steers with the front wheel while the pedals turn the back wheel using a chain. Brakes operated by hand levers on some bikes also increased safety.

In 1888, Scottish inventor John Boyd Dunlop re-invented a type of tire which was filled with air. This made safety bicycles more comfortable. Soon, the freewheel was invented. This was a device inside the hub of the back wheel that allowed the wheel to spin even if the rider wasn't pedaling. However, this meant the rider could no longer stop the bike by backpedaling. As a result, better hand brakes were invented, and a different type of brake which could stop the bike if the pedals were turned backwards. Later inventions included better brakes, and gears which made cycling over hills much easier. During this time the bicycle became very popular.

Basic components common to most bikes include a seat, pedals, gearing, handlebar, wheels, and brakes, all mounted on a frame. The majority also have a gear shifter. The cyclist's feet push the pedals to make them go around in circles, which moves the chain, which turns the back wheel of the bike to make the bike move forwards. The front wheel is connected to the handlebar, so turning the handlebar from side to side swivels the front wheel which steers the bike. 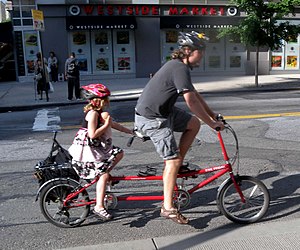 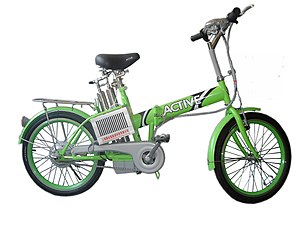 Many thousands of people are hurt every year in bicycle accidents, and hundreds die.[3] Careful riding helps prevent accidents. When riding on streets, it is safest to ride on the same side of the street that cars drive (which would mean riding on the right side of the road in countries where people drive on the right side of the road, and riding on the left in countries where people drive on the left). To avoid hitting people, riders must obey signs that say "no bicycling", even if it does not seem to make sense at the time. Low light makes bicycle lighting important. It may not be safe to ride when it is dark. Riders wear reflective clothing to be safer in low light. Wearing a helmet makes bicycle riding safer. Wearing a helmet does not mean that somebody cannot be hurt if they crash their bicycle, but it makes being hurt less likely.[4] Some bicycles have bells or horns that the rider can use to warn other people that they are riding by them.

Many places have a bicycle path linking houses with shops, schools and stations. These make bicycling safer, letting cyclists stay away from busy motor traffic on dangerous roads.