Ottawa is the capital of Canada and is part of the province of Ontario. It is south of the Ottawa River. In 2004, there were about 808,391 people in the city. The region has about 1,146,790 people. The mayor of the city today (since December 2010) is Jim Watson. Ottawa is in the Ottawa Valley on the border with the province of Quebec. Ottawa is the fourth largest city in Canada.

When people talk about Ottawa, they are sometimes using the name as an eponym meaning the highest government in Canada, and not its local government or the city.

The cities of Ottawa, Kanata, Nepean, Gloucester and Vanier and the villages of Manotick and Rockcliffe Park joined in the year 2000 to form the new city of Ottawa. Ottawa also includes Orléans, which joined at that same time.

The city began with the name Bytown and became the city of Ottawa in 1855. The Rideau Canal ends in Ottawa.

Ottawa has many museums, many buildings for the government of Canada and many parks. There is a market area downtown.

There are many festivals during the year including Winterlude in February, The Tulip Festival in May, and BluesFest in the summer. There is also a large celebration on July 1st for Canada Day. 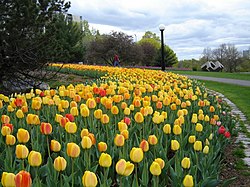 There are lots of tulips in Ottawa in May.

The average yearly precipitation in Ottawa is 943 millimetres.

2017 was a record year in Ottawa because there was precipitation of 1,213 millimetres during the first ten months of the year. The old record was in 1972, when the precipitation was 1,174 millimetres. [12]