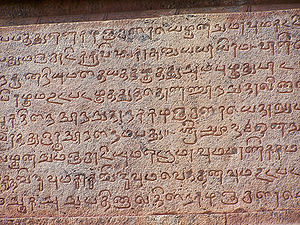 Ancient Tamil inscription at the Brihadeeswara Temple in Thanjavur

Some countries, like Switzerland and Luxembourg, have more than one official language. Other countries, such as the United States and Australia, may not have a de jure official language set by law, but they may have one or more national languages that is considered de facto official because it is used by the government and people in the country.