The Harry Potter logo, used first in American editions of the novel series and later in films 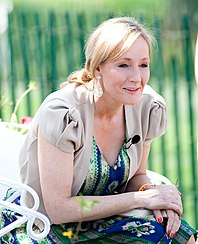 J. K. Rowling, the author of the Harry Potter books

A set of all seven UK Edition Harry Potter novels.

Harry Potter was born in Surrey, England, United Kingdom. His parents, Lily and James Potter, were killed by an evil wizard named Lord Voldemort, while Voldemort was trying to kill Harry. Yet Harry escaped with no harm except a scar in the shape of lightning bolt, and Voldemort ends up mostly dead. Harry is raised by his non-magical Aunt Petunia, Uncle Vernon, and cousin (Dudley), and is mistreated by them. As a child, he did not know that he was a wizard. He eventually discovers that there are many magical people, living secretly and hiding from non-wizards (known as "Muggles"). When Harry turned eleven on July 31, he received a letter inviting him to go to a school called Hogwarts for young witches and wizards. Each book tells the story of one year of his life at the school and tells how he struggles. On Hogwarts Express, the train they use to get to Hogwarts, he meets Ron Weasley and Hermione Granger, who become his best friends. Voldemort tries several times to return to life and kill Harry. In the fourth book, Voldemort comes to life with help from his follower, Peter Pettigrew.. The series ends with an epic battle between Harry and Lord Voldemort.

The seven books were all adapted into different forms of media, including toys, movies, spin-off movies, video games and a stage play as well.

Harry Potter and the Cursed Child is a play based on a new story by J.K Rowling, Jack Thorne, and John Tiffany. It is billed as being the "eighth story, nineteen years later." It stars Jamie Parker as Harry, Noma Dumezweni as Hermione, and Paul Thornley as Ron.

"While Harry grapples with a past that refuses to stay where it belongs, his youngest son Albus must struggle with the weight of a family legacy he never wanted. As past and present fuse ominously, both father and son learn the uncomfortable truth: sometimes, darkness comes from unexpected places."[1]

Characters and actors of the movies

The book has many non-human magical characters. Some of them are from mythology and others Rowling wrote herself. Some of these magical creatures have their own culture and some are like animals. According to the real-world book, Fantastic Beasts and Where to Find Them, the Ministry of Magic makes three groups of creatures: Being, Beast and Spirit. Beings are creatures like humans and house elves, who are smart enough to manage their own business and Beasts are not.[4]