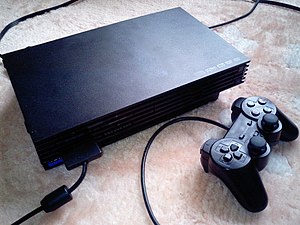 The PlayStation 2 is Sony's second video game console. It was released in March of 2000. The one before this was PlayStation (or PS1). The next PlayStation is PlayStation 3 which was released in November 2006. The controllers of the PlayStation 2 and PlayStation 3 are the same, but the PlayStation 3 is used wirelessly and doesn't have an analog button. Some games are online e.g. Call of Duty World at War Final Fronts and a few connect with the PlayStation Portable (or PSP). The PS2 is very successful and games are still made for it. The PlayStation 2 is the world's best-selling console. It has sold around 159 million units since its launch in March 2000, and is fully compatible with PlayStation (PS1) games. It competed with the Nintendo GameCube and the Microsoft Xbox during its lifetime. Even with the release of the PS3, the PS2 remained popular well into the seventh and eighth generations until Sony announced that they had discontinued the PlayStation 2 in Japan on December 28, 2012 and worldwide on January 4, 2013.[1] The last two games for the system were FIFA 14 and Pro Evolution Soccer 2014 (released only in Europe) in late 2013 (a week before the PlayStation 4's release date). Both these games also had PS3 and PS4 versions. Online functionalities had ended on March 31, 2016. Repair for the system had ended in Japan on September 7, 2018.

The PSX was released in 2003. It was a video recorder that allowed you to play PlayStation 2 games. It had a built-in hard drive (up to 250 GB). It did not sell well, because it cost too much money, so it was not released outside of Japan.[2] Grand Theft Auto: San Andreas became the most sold game, with over 27.5 million copies sold.