The Wii (/wiː/ wee; also known as the Nintendo Wii) is the video game home console made by Nintendo.[16] It first came out on November 19, 2006, in North America. It plays video games made for the Nintendo Wii and, specifically for the original model, the Nintendo GameCube.[16] It was succeeded by the Wii U on November 18, 2012 which has backwards compatibility with all Wii games and controllers. With over 101 million units sold, the Wii is Nintendo's highest-selling home console. The original Wii and Wii Family Edition were discontinued on October 21, 2013, although the Wii Mini remained in production until November 13, 2017. The Wii recieved positive reviews. 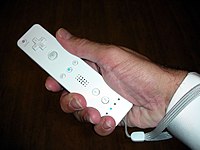 The Wii Remote is a controller that is like a regular television remote. The Wii Remote uses accelerometers and infrared light sensors (from LEDs inside a 'sensor bar') to know where it is in 3D space.[17] This lets people control the game using physical movement and by pressing buttons. The controller connects to the console using Bluetooth. It has a rumble feature (the controller shakes when the game being played tells it to do so) and a speaker inside the remote.

An attachment to the Wii Remote that comes with the Wii console and can also be bought by itself in stores is the Nunchuk controller. It also has an accelerometer and an analog stick with two buttons, and connects to the bottom of the Wii Remote with a wire. A wrist strap can also be used to stop the player from dropping or throwing the Wii Remote. Because of problems with the straps, Nintendo has given all players a free stronger replacement for all straps.[18] It also comes with a cover called the Wii Remote Jacket, which protects the Wii Remote and the thing that it hits from being damaged or broken.[19] It also gives a stronger grip which makes it harder for the Wii Remote to slide out of players' hands.

A revision of the Wii (also called the RVL-101) that was released near the end of its lifecycle was announced on August 17, 2011. This model is designed to only sit horizontally (with the buttons changed accordingly) and is incompatible with the Nintendo GameCube's software and its accessories. This model was released in North America on October 23, 2011, in Europe on November 4, 2011, and in Australia on November 11, 2011. It was not released in any Asian countries. The Wii Family Edition includes a black console, the game New Super Mario Bros. Wii, and the Super Mario Galaxy: Original Soundtrack.

Another late-cycle revision of the Wii (also called the RVL-201) was announced on November 27, 2012.[20] As its name suggests, the Wii Mini is the smallest model of the Wii. Like the Family Edition, it is not compatibile with GameCube games and its accessories. In addition, it also does not have online features and several built-in channels, such as the Photo Channel and the Weather Channel, similar to the Wii Mode on the Wii U. It also can only sit horizontally. The main feature is its notable redesign. Unlike the original Wii and Family Edition which are mostly white, the Wii Mini is black with a red framing. All the buttons are located on the top of the console and it lacks online support for Wii games. Additionally, the Wii Mini has a manually operated top-loading disc drive (similar to that of the GameCube) instead of the slots that former models have. The console launched in Canada on December 7, 2012 for $99.99. It was then released in Europe on March 15, 2013 at a cost of at least $79.99. It was then launched UK on March 22, 2013 for $99.99. It was finally launched in North America on November 17, 2013, bundled with a red Wii Remote Plus and a red Nunchuk for $99.99. Like its predecessor, the Wii Mini was not released in any Asian countries and it and it was not released in Australia either. The Wii Mini is the third home Nintendo console since the SNES and NES to receive a redesign right after its respective successors launched though the NES 101 model launched 2 years after the SNES launched. The N64 received no redesigns of any kind and the GameCube had a small revision which lacked the unused Serial Port 2 (though the cover still remains) and the unpopular Digital AV Out port.