A Neumann U87 capacitor microphone.

A microphone, sometimes referred to as a mike or mic (both IPA pronunciation: [maɪk]), converts sound into an electrical signal.

Microphones are used in many applications such as telephones, tape recorders, hearing aids, motion picture production, live and recorded audio engineering, in radio and television broadcasting and in computers for recording voice.

Sound passes through the air in waves, and as was said above, the microphone turns the sound wave into an electrical wave. Different kinds of microphones will turn the sound waves into electricity in different ways.[1]

A pop filter (or pop shield) is often used in recording studios. It is an electronic filter that reduces or eliminates 'popping' sounds caused by fast moving air (such as air from the mouth).

The first microphones were invented as telephone transmitters. They included liquid and dynamic designs. Carbon transmitters were later used in this and other applications. 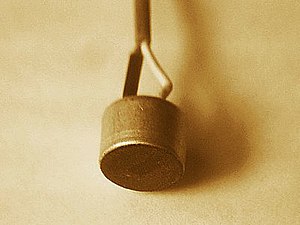