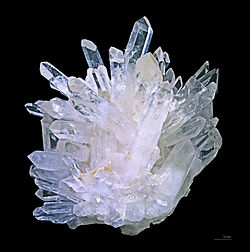 A crystal is a solid whose atoms (or molecules) are arranged in a repeating pattern.

Crystals are made from fluids by Crystallization, which is a kind of phase change. Usually the fluid is a liquid, but crystals can form from a gas too. For example, snow is water crystals (ice) formed from air that contains water vapor (evaporated water). Crystallization can be by freezing from a simple fluid or from a solution. Sometimes heat and pressure needs to be applied to a substance for crystals to form. Diamond is a carbon crystal formed under heat and pressure. Crystals are found naturally or can be made artificially.

The surface of crystals often have regions that are flat, called facets. Facets occur naturally as crystals form, because flat layers of atoms are usually the most stable. The atoms in a facet are arranged in a regular pattern, such as the pattern of a chess board or a honeycomb. These facets reflect light to give crystals their shiny or sparky appearance. Artificial facets can be made in any shape by cutting or grinding a crystal, which is how some gemstones for jewelry are made.

Different substances form different types of crystals. The study of the arrangement of atoms in crystals is crystallography. Well-known substances that form crystals are table salt (whose crystals are cubes), diamond, and quartz.

Atoms (as ions) in a crystal of sodium chloride (table salt). The blue ions are sodium and the green ions are chloride