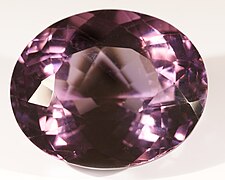 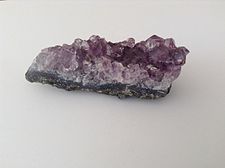 A natural rock with amethyst
This page is about the gemstone. For the color, see Amethyst (color).

An amethyst is a mineral gemstone that comes from quartz. It is usually transparent. It is valued because of its violet colour. Even though it is a form of quartz, it has more iron oxide (Fe2O3) than any other kind of quartz.[1] Because of this, some experts think that its colour comes from the iron in it.[1] Heating the amethyst either takes away its colour or changes it to a yellow hue. Amethysts are found in Brazil, Uruguay, Canada (Ontario) and America (North Carolina). The rock amethyst is the birthstone of the month February. In the Mohs scale, it has a hardness of seven.[2]

Many people believe amethysts protect one from poison, evil, and getting drunk.[3] This is where the name of this rock came from, The Greek word amethustos, means "without being drunken". Also they are thought to be good for hearing, recovering from headaches, good dreams, and more. Some Catholic popes also wear a rosary of amethyst around their necks.[2] Some Roman women thought gems could keep their husbands faithful to them.

Amethysts are also worn because people think it makes them look gentle.[2] The “powers” of an amethyst also include healing, peace, love, more spirituality, courage, protection from robbers, and happiness.[2]

In the Book of Revelations the amethyst was one of the twelve foundation stones of New Jerusalem.[4]

There are many stories and myths about amethysts. One of them tells how amethysts were supposedly created. According to the story, Bacchus, the Roman god of wine and partying, was angry because of something against him and wanted to get revenge.[5] He ordered that the first person who was mortal to come across his path would be eaten by tigers. Just at that moment a beautiful maiden named Amethyst came, on her way to worship the goddess Diana. Diana saw what was going to happen and she quickly made Amethyst into a stone to save her from the tigers. When Bacchus saw this, he repented and poured wine over the stone, making its color purple.[5]

The amethyst is worn and used for fashion in a number of different ways. It is polished and shaped for rings, earrings, and cufflinks. It may be also used for brooches, sometimes being carved into a cluster of grapes. People like the way amethysts look, especially when they are put in gold and diamonds.[5]

The amethyst is worn by royalty and nobility. This is because its royal color was purple. When it was found in the Minoan period in Greece (c. 2500 B.C.), it was polished and shaped into cabochons (dome-shaped stones). Then, it was set in gold. During the 15th century, the French fleur-de-lis brooch could only be worn by the Royal family on special times.[5] The fleur-de-lis design on it is put in with sapphires and amethysts.[6]