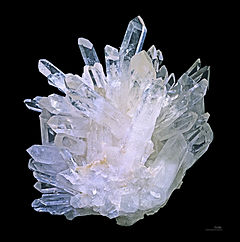 Quartz is a tectosilicate mineral that is the second most common mineral in Earth's continental crust.[1] Its crystal structure is a framework of SiO4 silicon–oxygen tetrahedra. Each shares an oxygen atom with another tetrahedron, so the overall chemical formula is SiO2 or silica.

There are many different varieties of quartz, some of which are semi-precious gemstones. They have been used for a long time to make jewelry and hardstone carvings. Agate, amethyst, rose quartz are all forms of quartz.

Quartz crystals are used in oscillators, for example in quartz clocks. People also extract the silicon to make semiconductors. The majority of sand is small quartz bits. Quartz has a mineral hardness of 7. (mohs scale).

The word "quartz" comes from the German word "quarz".[2]

'Fused quartz' is glass made of silica in non-crystalline form. It does not contain other ingredients that are added to other glass to lower the melting point. Fused silica has high working and melting temperatures. For some purposes, fused quartz is better than other types of glass due to its purity. The glass is used in a number of high-tech products.[3] 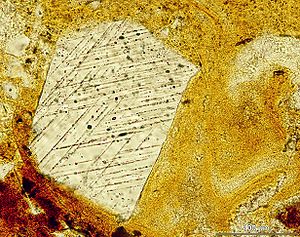 Shocked quartz is a form of quartz that has a microscopic structure different from normal quartz. Under intense pressure (but limited temperature), the crystalline structure of quartz is deformed along planes inside the crystal. These planes show up as lines under a microscope.

Shocked quartz is found worldwide, especially in impact craters and in the thin Cretaceous–Paleogene boundary layer. This is at the contact between Cretaceous and Paleogene rocks. It is further evidence (in addition to iridium enrichment) that the transition between the two geologic periods was caused by a large impact. Eugene Shoemaker discovered it in building stones in the Bavarian town of Nördlingen. The stones were from shocked metamorphic rocks, such as breccia, of a meteor crater.[4]