For the article about a mathematical concept, see Ring (mathematics) 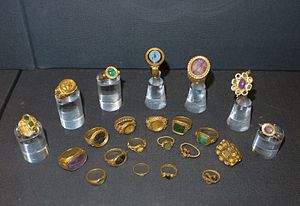 Late roman rings from the Thetford Hoard in the British Museum

A ring is a piece of jewelry that is usually worn on the finger.

It is usually made of metal such as gold, silver, platinum, but can be made of other things, for example, bone or glass. Many rings have gemstones on them, for beauty and decoration on your finger. It is a fashion accessory and sometimes a sign of importance (status). The Lord Chancellors of England were given a ring when taking office, and returned it when leaving the position. The ring identified them as the second most important person in the kingdom. In most religions, senior clergy have rings of their office. It is standard practice for members of a church to kneel and kiss the ring as a sign of faith and obedience.

Rings have been used for engagements and weddings since prehistoric times.[1][2][3]The engagement ring is meant to be a sign of luck and happiness. Both men and women used to wear an engagement ring to show that they were going to be married, but more recently only women have worn them. A diamond ring is seen as being especially lucky, as the sparkle of the diamond is said to come from the fires of love. A pearl in a ring is unlucky, as the pearl is a sign of tears. Because the ring is round and does not have an end, it is seen as a symbol of love which never ends.[2] These are, of course, superstitions. However, a wedding ring is a public symbol of a legal relationship, and in many societies rings have that kind of function.