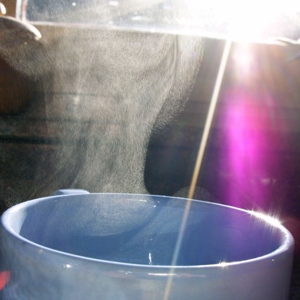 Water vapor is water that is in the form of a vapor, or gas. It is a part of the water cycle. When liquid water is heated to boiling point, 100 degrees Celsius (212 F), it turns into vapor. Water vapor can also be produced directly from ice; this is called sublimation. Steam is water vapor, but clouds are liquid water. The amount of water vapor in air is called humidity and it affects weather conditions. In the cold, breathing out causes the water vapor in the breath to freeze.

Water vapour is transparent. The small droplets that look white like mist are actually liquid.

Water vapour is a big cause of the greenhouse effect.

Water vapor is invisible but when it condenses it makes visible water.