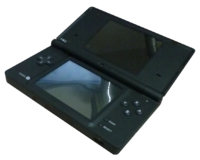 The DSi is about 12% thinner (2.6 mm) and the screen is about 17% bigger than the Nintendo DS Lite.[2][3] It has two Video Graphics Array (or VGA) 0.3 megapixel [2][4] digital cameras; one is pointed at the user and the other is in the outer shell.[5][6][7][8] The power switch is now a power button like the original Nintendo DS instead of a switch and is moved to the bottom to make it harder to bump by accident. It no longer has a slot to play Game Boy Advance games in and one will not be able to play games such as Guitar Hero: On Tour on the DSi because the game requires the slot and the download games.