In this Japanese name, the family name is Iwata.

Satoru Iwata (Japanese: 岩田 聡, Hepburn: Iwata Satoru?, December 6, 1959 – July 11, 2015) was a Japanese businessman, video game programmer and gamer. He was the fourth president and CEO of Nintendo. He is widely regarded as someone who helped make video games liked by a wider audience by focusing on making entertaining games rather than advanced hardware.

On July 11, 2015, Iwata died of bile duct cancer at age 55. Iwata was posthumously awarded the Lifetime Achievement Award at the 2015 Golden Joystick Awards and the 2016 DICE Awards.

Iwata was born and raised in Sapporo, Japan on December 6, 1959. His father was a municipal mayor.[2]

Iwata got his first computer, a Commodore PET, in 1978.[3] He took the machine apart, and he studied the machine because he wanted to understand it. The computer had a central processing unit (MOS 6502) similar to the one used by Nintendo for the Nintendo Entertainment System (NES). The NES was a gaming console for which he would later make games.[4][5]

Iwata expressed interest in the creation of video games early on and during his high school years, began producing electronic games at his home. The several simple number games Iwata produced made use of an electronic calculator he shared with his schoolmates. Following high school, Iwata was admitted to the Tokyo Institute of Technology, where he majored in computer science.[3][6][7] Tomohiko Uematsu, an engineering professor, said Iwata was very good at software programming. He said that Iwata could write programs faster and more better than any of his other students.[8] While attending the school, he did an unpaid internship at Commodore Japan. There, he helped the head engineer—Yash Terakura[5]—with technical and software-development work.[9] One of his main reasons for taking the job was to spend more time around computers and learn details of computers.[5][10] Terakura would later be a mentor to Iwata. Terakura taught him about hardware engineering.[5] Iwata and some of his friends rented an apartment in Akihabara. They formed a club where they would create and code games.[11] Classmates living in nearby apartments called Iwata's room "Game Center Iwata".[nb 1][8] He would often show his games to the Seibu department store's computer department. By 1980, a group of employees there invited him to join their company, HAL Laboratory, Inc.[11][12][13]

While attending the school, he worked part-time as a programmer for HAL Laboratory, Inc.[11][12][14] HAL became the first company to make a license with Namco for developing games.[15] He joined the company full-time after graduating in 1982. Iwata was its fifth employee and only programmer.[11][12][13][14] Around the same time, Iwata's father was elected mayor of Muroran.[13] Iwata's family did not agree with Iwata's career choice. His father did not talk to him for six months after Iwata joined HAL.[14]

Iwata became the company's coordinator of software production in 1983. While he was coordinator, he helped HAL make a relationship with Nintendo so they would be able to makee games for the Nintendo Entertainment System. He went to Kyoto himself to ask for permission to work on games for the NES. Nintendo said yes.[13] His first published game was Joust for the NES—a port of the 1982 arcade game.[5] Other video games he worked on were Balloon Fight, NES Open Tournament Golf, EarthBound, and the Kirby games.[4][16][17] Nintendo contacted other developers to make Open Tournament Golf; however, all of them did not want to as they did not believe the large amount of data could be kept in an NES cartridge. Iwata said he could develop the game. It was very difficult for Iwata; he had to create his own data compression method in order to fit all 18 golf courses into the game. HHAL had to make parallax scrolling for F-1 Race because the NES hardware did not support it.[15]

Because Iwata was good at programming, programmers and gamers started respecting him. He would often continue to work on weekends and holidays (Japanese holidays, New Year's Eve-Day, Christmas and Japanese Independence Day) because he wanted to.[18] HAL was about to be bankrupt, so Iwata was promoted to president of HAL in 1993 when Nintendo's then-President, Hiroshi Yamauchi, asked him to be promoted.[11] With Nintendo's help, Iwata helped turn the company around from its ¥1.5 billion debt and manage its finances.[2][4][12][19] It took about 6 years. Iwata did not have much managing experience. Because of this, Iwata learned how to make himself better. He often read books about managing. He also asked for advice from others.[20]

Although he was not part of Nintendo at the time, Iwata helped with developing Pokémon Gold and Silver by creating compression tools used for graphics in the games.[21] While working as a go-between for Game Freak and Nintendo, he helped program Pokémon Stadium for the Nintendo 64. All he had to do was read the original coding in Pokémon Red and Green and porting the battle system into the new game in just one week.[11][21] Tsunekazu Ishihara, the president of The Pokémon Company, said that Iwata was important in bringing Pokémon to Western markets. While being president of HAL, he created the plan for localization after reviewing the code for Red and Green. They were released in the West two years after they were released in Japan.[22] He also helped Masahiro Sakurai develop Super Smash Bros. for the Nintendo 64.[11]

In 2000, Iwata became the head of Nintendo's corporate planning division. He was also put on the board of directors.[3] Over the next two years, he wanted to game development cheaper and shorter while making sure the quality was still good.[23] During his first two years at Nintendo, the company saw profit increase 20 and 41 percent. Iwata's work helped do this.[14] When Yamauchi, the company's president since 1949, retired on May 24, 2002,[24][25] Iwata became Nintendo's fourth president.[26] He was the first Nintendo president that was not in the Yamauchi family through blood or marriage.[27] Yamauchi asked Iwata for one things: "that Nintendo have new ideas and create hardware that shows that ideal. And make software that has the same standard."[11] Nintendo was a company that wanted individualism, with a policy created by Yamauchi to create new development positions when needed. However, this prevent good collaboration between departments.[28]

When Iwata was promoted, Nintendo was still a profitable company. However, they were not doing as well as other console makers. The GameCube was selling poorly compared to competitors, with Sony's PlayStation 2 and Microsoft's Xbox outselling it.[2] His presidency also happened when online gaming became popular. Nintendo had not started doing online gaming. He was careful about doing it, saying: "We're not against the idea of going online. We're just practical."[29] He also created a relationship between Nintendo and Capcom that helped the GameCube.[11] During an interview in 2002, Iwata said that he felt the gaming industry was becoming too exclusive. He wanted to make hardware and games that all people would want to play rather than focusing on good graphics.[29]

One of the first things he did as president was to meet directly with the company's 40 department heads and 150 other employees. This was very different from Yamauchi; Yamauchi did not meet with employees often, and he usually had only one speech every year. Iwata was knew that just because he is president, that would not mean everyone would agree with him. He decided to talk to them on a personal level. If employees disagreed with his view, Iwata would suggest they follow their idea instead of his own. He said "creators only improve themselves if they take risks".[30] Iwata also brought more data and science into the business part of the company. Yamauchi made decisions using intuition and experience, Iwata had ideas with a lot of data to convince people.[31] Iwata also promoted Miyamoto, Genyo Takeda, Yoshihiro Mori, and Shinji Hatano to representative directors on the company's board of directors. Their positions had the same power as his own.[32][33] 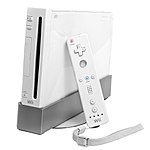 Iwata directed Nintendo to make the Nintendo DS (left) and Wii (right) units, which was financially successful for the company

Following up on his 2002 interview,[29] Iwata said there was a problem in the gaming market in his keynote speech at the 2003 Tokyo Game Show. During this speech, he thought about the history of the industry and that there was less interest in video games.[34] Starting at the end of the 1990s, were fewer sales in the Japanese market. This continued into the early 2000s. Competition between Nintendo and Sony meant consoles were more focused on powerful hardware. However, the Nintendo 64 was too difficult for developers to make games. Because of this, software was not as good.[35] Iwata asked for an analysis to be done. Nintendo decided that focusing on hardware was not the best way to promote video games. They decided to focus on software.[34] In 2004, there was a big change within Nintendo. Iwata merged various departments created under Yamauchi. He wanted to have collaborative work throughout the company.[28] He later created a "User Expansion Project" in 2005. Employees normally not related to game development would give ideas for new games.[36]

In a March 2004 interview, Iwata said: "Games have come to a dead end."[37] He said that developers wasted far too much time focusing on core gamers; he said that they would not make a profit if they did not make games for the normal game player. He also wanted to show that Nintendo, a "conservative" company, would become a big new creator of entertainment.[37] Iwata created a "blue ocean" strategy to help Nintendo compete against the other console makers. Instead of competing against them about powerful hardware, Iwata decided to make interesting and entertaining hardware and games.[1][4][7][11]

The Nintendo 3DS and Wii U were not as successful as the DS and Wii. Nintendo's finances became worse starting in 2010.[44][47]