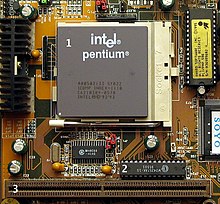 A Pentium CPU inside a computer

A central processing unit (CPU) is an important part of every computer.[1] The CPU sends signals to control the other parts of the computer, almost like how a brain controls a body.[2]

The clock rate, or speed of a CPU's internal parts, is measured in hertz (Hz). Modern processors often run so fast that gigahertz (GHz) is used instead. One GHz is 1,000,000,000 cycles per second.

Most CPUs used in desktop (home) computers are microprocessors made by either Intel or Advanced Micro Devices (usually shortened to AMD). Some other companies that make CPUs are ARM (recently bought by Nvidia[3]), IBM, and AMD under ATI Technologies, which is the leader right now. Most of their CPUs are used in embedded systems for more specialized things, like in mobile phones, cars, video game consoles, or in the military.[4]

In the 20th century engineers invented many different computer architectures. Nowadays most desktop computers use either 32-bit CPUs or 64-bit CPUs. The instructions in a 32-bit CPU are good at handling data that is 32 bits in size (most instructions "think" in 32 bits in a 32-bit CPU). Likewise, a 64-bit CPU is good at handling data that is 64 bits in size (and often good at handling 32-bit data too). The size of data that a CPU handles best is often called the word size of the CPU. Many old CPUs from the 70s, 80s and early 90s (and many modern embedded systems) have an 8-bit or 16-bit word size. When CPUs were invented in the middle 20th century they had many different word sizes. Some had different word sizes for instructions and data. The less popular word sizes later stopped being used.

Most CPUs are microprocessors. This means that the CPU is just a single chip. Some chips with microprocessors inside them also contain other components, and are complete single-chip "computers". This is called a microcontroller.

Storing all data in registers would make most CPUs too complicated (and very expensive). Therefore, registers usually only store the data that the CPU is working on "right now". The rest of the data used by the program is stored in RAM (Random Access Memory). Except in microcontrollers, RAM is usually stored outside the CPU in separate chips.

When the CPU wants to read or write data in RAM, it outputs an address to that data. Each byte in RAM has a memory address. The size of addresses is often the same as the word size: A 32-bit CPU uses 32-bit addresses, etc. However, smaller CPUs, like 8-bit CPUs, often use addresses that are larger than the word size. Otherwise the maximum program length would be too short.

Because the size of addresses is limited, the maximum amount of memory is also limited. 32-bit processors can usually only handle up to 4 GB of RAM. This is the number of different bytes that can be selected using a 32-bit address (each bit can have two values—0 and 1—and 232 bytes is 4 GB). A 64-bit processor might be able to handle up to 16 EB of RAM (16 exabytes, around 16 billion GB, or 16 billion billion bytes). The operating system may limit it to using smaller amounts.

The information that is stored in RAM is usually volatile. This means that it will disappear if the computer is turned off.

On modern computers, RAM is much slower than registers, so accessing RAM slows down programs. To speed up memory accesses, a faster type of memory called a cache is often put between the RAM and the main parts of the CPU. The cache is usually a part of the CPU chip itself, and is much more expensive per byte than RAM. The cache stores the same data as RAM, but is usually much smaller. Therefore, all the data used by the program might not fit in the cache. The cache tries to store data that is likely to be used a lot. Examples include recently used data and data close in memory to recently used data.

Computer buses are the wires used by the CPU to communicate with RAM and other components in the computer. Almost all CPUs have at least a data bus - used to read and write data - and an address bus - used to output addresses. Other buses inside the CPU carry data to different parts of the CPU.

An instruction set (also called an ISA - Instruction Set Architecture) is a language understood directly by a particular CPU. These languages are also called machine code or binary. They say how you tell the CPU to do different things, like loading data from memory into a register, or adding the values from two registers. Each instruction in an instruction set has an encoding, which is how the instruction is written as a sequence of bits.

Programs written in programming languages like C and C++ can't be run directly by the CPU. They must be translated into machine code before the CPU can run them. A compiler is a computer program that does this translation.

Here are some of the basic things a CPU can do:

Even very complicated programs can be made by combining many simple instructions like these. This is possible because each instruction takes a very short time to happen. Many CPUs today can do more than 1 billion (1,000,000,000) instructions in a single second. In general, the more a CPU can do in a given time, the faster it is. One way to measure a processor's speed is MIPS (Million Instructions Per Second). Flops (Floating-point operations per second) and CPU clock speed (usually measured in gigahertz) are also ways to measure how much work a processor can do in a certain time.

A CPU is built out of logic gates; it has no moving parts. The CPU of a computer is connected electronically to other parts of the computer, like the video card, or the BIOS. A computer program can control these peripherals by reading or writing numbers to special places in the computer's memory.

Each instruction executed by a CPU is usually done in many steps. For example, the steps to run an instruction "INC A" (increase the value stored in register A by one) on a simple CPU could be this:

Modern CPUs often use a memory management unit (MMU). An MMU is a component that translates addresses from the CPU to (usually) different RAM addresses. When using an MMU, the addresses used in a program are (usually) not the "real" addresses where the data is stored. This is called virtual (the opposite of "real") memory. A few of the reasons why it is good to have an MMU are listed below:

Multi-core processors became much more common in the early 21st century. This means that they have many processors built on to the same chip so that they can run many instructions at once. Some processors may have up to sixty-four cores, like the upcoming AMD Epyc "Milan" series.[5] Even processors for consumers have many cores, such as the 16-core AMD Ryzen 9 5950x.

Some processors have a technology known as multithreading. This is the task of running more than one "thread" of instructions in an operating system. Many modern processors use this to boost performance with heavy multi-threaded programs, such as benchmark programs.