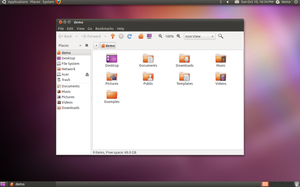 An operating system has many jobs. It makes sure that all the programs can use the CPU, system memory, displays, input devices, and other hardware. Some also give the user an interface to use a computer. An OS is also responsible for sending data to other computers or devices on a network.

Some examples of commonly used operating systems are macOS, Linux, and Microsoft Windows.

The first operating system was used with the ENIAC (Electronic Numerical Integrator and Computer).[1] It was very hard to make ENIAC do work. How the operating system worked was based on how the switches and cables were put together and depending on this factor punch cards would make a result. While this was an operating system of a kind, it is not what is thought of as one in modern times.

A distributed operating system manages a group of distinct computers and makes them appear to be a single computer. Distributed computations are carried out on more than one machine.

In an OS, distributed and cloud computing context, templating refers to creating a single virtual machine as a guest operating system, then saving it as a tool for multiple running virtual machines. The technique is common in large server warehouses.

A library operating system is one in which the services that a typical operating system provides, such as networking, are provided in the form of libraries and composed with the application and configuration code to construct a unikernel: a specialized, single address space, machine image that can be deployed to cloud or embedded environments.