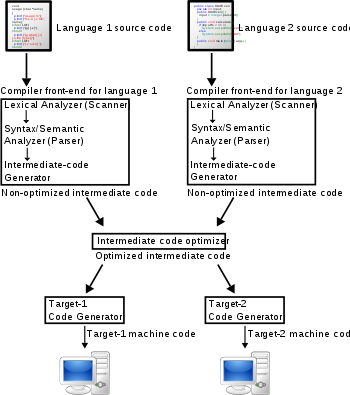 A compiler has six parts :

The first piece, a lexical analyzer, reads a page of instruction text and splits it into words and sentences. It also marks the type for each word. For example, a word may be number, a variable, a verb, a math sign, or an adjective. The output of a lexical analyzer is a list of tokens.

A parser reads in the output of the lexical analyzer, and verifies the syntax of the language. If the input program is syntactically incorrect or has a type error, it generates errors and warnings. This is called semantic analysis. For example, the parser might complain about the example above, if it had not already seen y with its type adjective. The parser uses all the information to make a structure typically called an Abstract Syntax Tree (AST).

The next piece, an optimizer rearranges the tree structure so the target language is optimized. 'Optimized' includes using fewer instructions to perform the same work. This could be important if the final program needs to check a lot of data. (Like seeing how many people, in the whole country, are fifty years old and buy medicine.) An 'optimized' result might also mean breaking long instructions into smaller ones. Unused and unaccessible code will be removed at this step.

A programmer usually tries to write instructions in small, related groups. That way, they can keep track of fewer changes in the program. But, that means the code may go on several pages. When a compiler sees that the target program uses several pages to explain the whole recipe, it may use a linker. The linker will put instructions that say where to find the code that's next. Finally, the compiler writes down the instructions in the target language.

Programmers who write compiler code try to make it as perfect as possible. If the programmer writes incorrect code, the compiler informs of them an error, but if the compiler code itself contains errors, it may be hard to tell where exactly the problem lies.

For example, the source code might contain an equation, such as "x = 5*10 + 6 + 1". The lexical analyzer would separate each number and symbol (such as "*" or "+") into separate tokens. The parser would note the pattern of tokens, as being an equation. The intermediate-code generator would write a form of coding which defines a storage variable named "x" and assigns the numerical product of 5*10 plus 6 and 1. The optimizer would simplify the calculation, of 5*10+6+1, as being just 57. Hence, the target machine-code generator would set a variable named "x" and put the value 57 into that storage place in the computer's memory, using the instructions of whichever computer chip is being used.

Help Improve This Page: Please contact us to become an approved KidzSearch editor and provide your credentials. Provide feedback on this article in our Compiler Forum