Machine code is a computer program written in machine language. It uses the instruction set of a particular computer architecture.[1] It is usually written in binary.[2][3][4][5] Machine code is the lowest level of software. Other programming languages are translated into machine code so the computer can execute them.

An instruction tells the process what operation to perform. Each instruction is made up of an opcode (operation code) and operand(s). The operands are usually memory addresses or data. An instruction set is a list of the opcodes available for a computer. Machine code is what assembly code and other programming languages are compiled to or interpreted as.

Program builders turn code into another language or machine code. Machine code is sometimes called native code. This is used when talking about things that work on only some computers.[6] 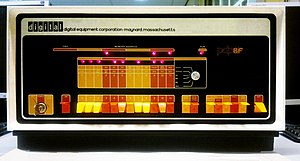 Front panel of an early minicomputer, with switches for entering machine code

Machine code can be written in different forms:

There are many kinds of instructions usually found in an instruction set:

Many modern processors use microcode for some of the commands. More complex commands tend to use it. This is often done with CISC architectures.

Every processor or processor family has its own instruction set. Instructions are patterns of bits that correspond to different commands that can be given to the machine. Thus, the instruction set is specific to a class of processors using (mostly) the same architecture.

Newer processor designs often include all the instructions of a predecessor and may add additional instructions. Sometimes, a newer design will discontinue or alter the meaning of an instruction code (typically because it is needed for new purposes), affecting code compatibility; even nearly completely compatible processors may show slightly different behavior for some instructions, but this is rarely a problem.

Systems may also differ in other details, such as memory arrangement, operating systems, or peripheral devices. Because a program normally relies on such factors, different systems will typically not run the same machine code, even when the same type of processor is used.

Most instructions have one or more opcode fields. They specify the basic instruction type. Other fields may give the type of the operands, the addressing mode, and so on. There may also be special instructions that are contained in the opcode itself. These instructions are called immediates.

The MIPS architecture has instructions which are 32 bits long. This section has examples of code. The general type of instruction is in the op (operation) field. It is the highest 6 bits. J-type (jump) and I-type (immediate) instructions are fully given by op. R-type (register) instructions include the field funct. It determines the exact operation of the code. The fields used in these types are:

Example: add the registers 1 and 2. Place the result in register 6. It is encoded:

Load a value into register 8. Take it from the memory cell 68 cells after the location listed in register 3: