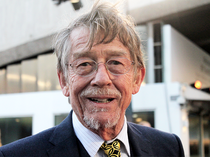 Sir John Vincent Hurt, CBE (22 January 1940 – 25 January 2017) was an English movie, television, voice, and stage actor. He is known for his roles in The Elephant Man, Melancholia, Immortals, Alien, Tinker Tailor Soldier Spy, Harry Potter and the Philosopher's Stone, Harry Potter and the Deathly Hallows and for his role as the War Doctor in Doctor Who. He won a Golden Globe Award and two BAFTA Awards.

In June 2015, Hurt announced that he had been diagnosed with early-stage pancreatic cancer.[2] He confirmed that he would continue to work while undergoing treatment, and said that both he and his medical team were "more than optimistic about a satisfactory outcome".[3] Following treatment, Hurt stated that he was in remission on 12 October 2015.[4]