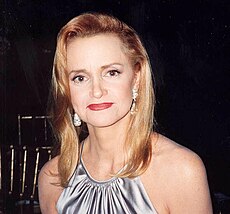 Swoosie Kurtz (b. September 6, 1944) is an American movie and television actress. She is from Omaha, Nebraska. She began her acting career in the late 1970s. She starred as Alex in the NBC drama Sisters. Her career has been mainly on television, but Kurtz has had some Hollywood movies.