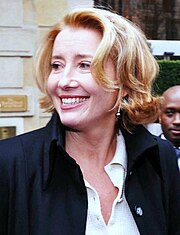 Emma Thompson (born 15 April 1959) is a British screenwriter, actress and comedian. She was born in Paddington, London, the elder daughter of Eric Thompson and Phyllida Law. Her sister is Sophie Thompson. She has won many Academy Awards for her acting. Her many movies include the Harry Potter franchise and the Nancy McPhee series. She has also won many BAFTA Awards.

Thompson was married to Kenneth Branagh from 1989 until they divorced in 1995. She has been married to Greg Wise since 2003.