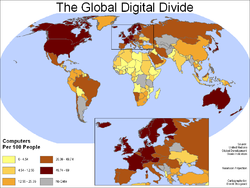 A personal computer (PC) is the common name for a type of computer that is most popular in offices and homes. The first PC called the "IBM PC" was made by the company called IBM in 1981, although many computers were made before like the Commodore PET. Smartphones and tablets are also computers for personal use, but they are not often called "personal computers".

Parts of a personal computer

A modern PC has a minimum set of parts to be useful. The "base unit" or "tower" (case) houses the computer parts. Usually, a mouse and keyboard are used for input, however some operating systems need only a keyboard. A monitor is usually needed to view output. In a laptop computer these parts are all together.

Inside the base unit or tower there are many electronic parts. The main parts are the motherboard, CPU, memory, and a data storage device, such as a hard disk or solid-state drive.

The CPU (Central Processing Unit) follows the instructions in the operating system and application programs. The memory, or RAM (random access memory), is for moving information (or data) quickly to and from the processor. The hard disk or solid-state drive hold programs and data while the computer is powered off. Floppy drives, CD-ROM drives, and USB flash drives are used for portable data storage.

Computers sometimes have a modem to send and receive data over a phone line, or more recently, over cable television lines. Computers can also be connected to a computer network using a network card.

Modern PCs have various sockets called ports. The most common ports are known as USB ports.

Computers may be used for work, including doing research using the internet, keeping records; or writing documents. Other uses include communicating, with people across the world using Instant messaging, e-mail or Skype or recreation activity such as playing computer games.