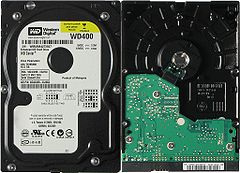 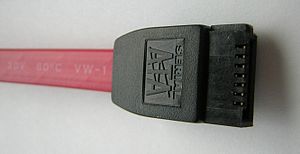 Over the years there have been many disk interface types, though all used the same rotating platter recording technology. Differences were in how the data was encoded to binary, data integrity, data transfer speeds, cabling requirements, and cost. In 2009, it was common to attach a hard disk using a Serial ATA connection. The connection that came before that was called "IDE" and is called Parallel ATA today. In large data centers, Fibre Channel is often used.

For servers, the SCSI interface is very popular. There are several types and versions of SCSI interface, like parallel and Serial Attached SCSI, each stepping-up in terms of speed and price. Within servers, several SCSI drives are often used in conjunction with each other, in order to safeguard against data loss or corruption (this is known as RAID - and there are many configurations to choose from).

The actuator controls the read/write head and acts as a permanent magnet. A metal plate supports a squat neodymium-iron-boron (NIB) magnet. Beneath this plate is the voice coil, which is attached to the actuator hub. Beneath the actuator hub is a second NIB magnet, mounted on the bottom plate of the actuator.

The voice coil is shaped like an arrow. It is made up of a magnet with plastic insulation. This magnet interacts with the actuator magnet, causing the disk to move. If the magnetic field were uniform it would cancel out, but the surface magnet is divided between north and south poles in the middle so force is produced instead of canceled out.

There are several reasons behind the corruption of internal and external hard drive.[1]

Virus & Malware Attack:- If a system is attacked by a virus, the important boot files stored in the internal hard disk may be deleted, leading to boot failure. Meanwhile, the crucial data and the complete partition may also be deleted by the virus or malware attack.

Due to Physical Damage:- It is also called hardware failure, and consists the following types: Overheating of hard drive, Read/write head crash, Cracked or poor-contact data line, Scratch on magnetic platters, Short circuit in the control circuit board and much more. The data lost due to these kinds of reasons can hardly be repaired. A user have no choice but to turn to expert for data recovery from hardware damaged hard drive.

Corruption of Boot Sector:- The boot sector is the first sector of the hard drive. This is used to load processor control and then move it to the Operating System. When, the boot sector is damaged, you will not be able to enter the system and access any data stored in the internal hard drive.

Damaged file system:- The file system is used by the Operating System to define the approach for organizing files on the storage device. To be particular, it is like a gateway to access data stored on hard drive partitions. If the file system on the internal hard drive is unluckily damaged somehow, the drive may become inaccessible and the system may fail to start.

Software Clash:- All kinds of applications you installed on your local machine currently may not able to be fully supportive with each other, so software clash occurs now and then to lead to sudden computer shutdown and cause internal hard drive corruption.

File:WD bad heads click of death.ogg When a hard disk fails to read the data (for example: if dropped, knocked over, or otherwise being damaged, the hard drive may start to click to indicate that it is damaged, or broken. File:Defective hard drive.webm The clicking sound itself arises from the unexpected movement of the disk's read/write actuator. At startup, and during use, the disk head must move correctly and confirm it is correctly tracking data on the disk. If the head cannot do this, the disk controller may attempt to recover by retrying. This may cause an audible "click". In some devices, the process automatically retries, causing a repeated or rhythmic clicking sound, sometimes accompanied by the whirring sound of the drive plate spinning.