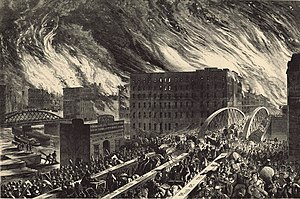 Drawing of the Great Chicago Fire from Harper's Weekly

The Great Chicago Fire was a large fire that started on Sunday October 8, 1871 in Chicago, Illinois. The fire started out as nine separated fires.[1] It burned until Tuesday October 10, 1871 when rain started to fall.

The fire destroyed 3.3 square miles (8.5 square kilometers)[2] and $192,000,000 in property. About 100,000 people were left homeless. Three hundred people died. Because of a large fire the night before, firefighters were too tired to quickly put out these fires.[3]

No one is sure what caused the fire. A legend says that it started when a cow knocked over a lantern in Catherine O'Leary's barn on De Koven Street.[4]

The oldest structure left standing in the area where the fire burned is the Couch family tomb. This stone tomb was built in 1858.[5]

Not all of the city was destroyed. Important places like the Stock Yards, where animals were slaughtered, were not damaged. Neither was the railroad system.[6]

The second red star of the Chicago flag represents the fire.[7]