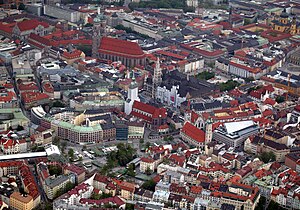 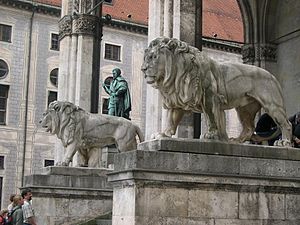 Lion sculptures by Wilhelm von Rümann at the Feldherrnhalle 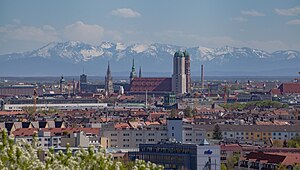 Alps behind the skyline of Munich

listen); Austro-Bavarian: Minga IPA: [ˈmɪŋ(ː)ɐ]) is the third biggest city of Germany (after Berlin and Hamburg), and the capital of Bavaria. It has a population of 1,407,000. The metropolitan area of Munich includes the city itself, and all the suburbs around it, and has about 2.6 million people in it. It is one of the most important centres of the economy in Germany. It has an oceanic climate (Cfb in the Koeppen climate classification).

The official population of Munich city proper at 310.43 km2 is 1,368,840 inhabitants only with principal residence as of 31st January 2009. Around 176,000 inhabitants with secondary residence also live in administrative city limits but they are not calculated in this official census. According to some estimates that population counts around 200,000 people. The fast growing Munich urban area has 2,667,000 inhabitants (2008 estimate). Munich city with all suburbs at 12,000 km2 has 4,700,000 inhabitants and Munich metropolitan region that covers 27,700 km2 and includes Augsburg, Ingolstadt, Landshut, Rosenheim and Landsberg has around 6,000,000 inhabitants. Munich is the 12th largest city in EU by population within city limits and the 14th largest urban area in Europe. Its metropolitan area ranks among largest metro areas in Europe. As of December 2008, 47.3% of Munich's residents belong to no religious group, 38.3% are Roman Catholic, 14.0% are Lutheran Protestants and 0.3% are Jewish.[4] There is also a small Old Catholic parish and an Episcopal Church.

The Bavaria Film Studios are in the suburb of Grünwald. They are one of Europe's biggest and most famous movie production studios.[9] 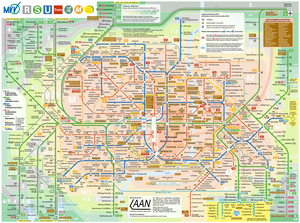 Munich hosted the 1972 Summer Olympics. They were one of the host cities for the 2006 Football World Cup. Munich bid to host the 2018 Winter Olympic Games but lost to Pyeongchang.[10] In September 2011 the DOSB President Thomas Bach said that Munich would bid again for the Winter Olympics in the future.[11]