Rotterdam is the second largest city in the Netherlands. There are aprox. 1.01 million people living in Rotterdam (was put in on 18.11.2020). Rotterdam has the biggest port in Europe. The city is on several rivers, most notably the Maas. Rotterdam, like all of the Netherlands, has an oceanic climate (Cfb in the Koeppen climate classification).

It hosts also a university: the Erasmus University Rotterdam.

On 18 March 2010, Rozenburg became a part of the municipality of Rotterdam.

A dam was built in 1260 across the river Rotte where the Hoogstraat is now. The name Rotterdam comes from this dam. The settlement was a regular fishing village at first, but became a thriving trading port pretty soon. The city got city rights in 1340 and city walls in 1360. Rotterdam became an important city in Holland in the middle of the 15th century when it won little wars against Delft and Gouda. From 1449 until 1525 a Gothic church (Laurenskerk) was built. The city then hold about 10,000 people. The city revolted against Spanish occupation in 1573, becoming one of the main city's of the Eighty Years' War. The port of Rotterdam grew a lot in the late 16th century and early 17th century. In the end of the 17th century the city hold almost 50,000 people. But the city had not built outside of the city walls. The city became very crowded.

The port of Rotterdam became bigger and bigger in the 19th century when several new canals were dug. These were: Nieuwe Waterweg (lit: New Waterway), and Voornse Kanaal. The city grew quickly due the enormous amount of work in the port. Population grew from 160,000 people in 1880 to 315,000 in 1900. Various new districts were built, including Cool, Crooswerk, and Nieuwe Westen. Neighbouring places also became part of Rotterdam. In 1920, the city held more than 500,000 people for the first time in its history 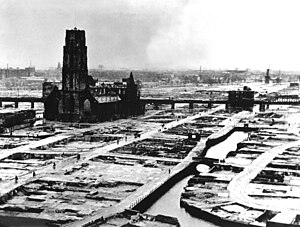 Rotterdam after the bombardment around the Laurenskerk 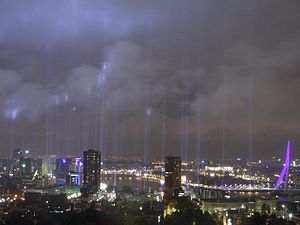 Nazi Germany attacked the Netherlands in May 1940. The Battle of the Netherlands brought heavy fighting in Rotterdam. In the Blitz of Rotterdam, the Germans bombarded Rotterdam on May 14, 1940. The damage was huge; 24,000 buildings were destroyed in only 15 minutes, and there was virtually nothing left of the old centre of Rotterdam. 800 people died instantly, and 80,000 were homeless. The bombardment also destroyed the Willemsbrigde, one of the two brigdes across the Maas at that time. The Germans repaired the bridge quickly, as it was of vital importance for the city. During the German occupation, the neighbouring places of Hillegersberg, Schiebroek, Overschie, Kralingseveer and Ijsselmonde are annexed (put by) by Rotterdam. On November 11th, 1944, a large razzia took place. About 50,000 men from 17–40 years old from Rotterdam were deported into working camps. The city also lost many people in the famine of 1944 (hongerwinter (lit: Winter of hunger)). 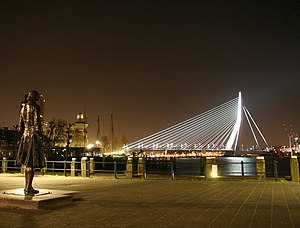 Erasmusbrigde as seen from the old harbor

Rotterdam was quickly rebuild after the war, but modernization led to the fact that many old buildings were not repaired, but replaced by totally new ones. The has led to the fact that the centre of Rotterdam is composed of new buildings, a thing not common in European city's. The ports of Rotterdam grow even more during the latter part of the 20th century. New area's, build right in the sea are Botlek, Maasvlakte, and Europoort. The Euromast (185 m high) becomes an icon of Rotterdam. De metro of Rotterdam is opened in 1968, which then is the first metro in the Netherlands. The 1990s saw an increase of skyscrapers. The Delftse Poort which was ready in 1991 was the highest skyscraper in the Netherlands, with 151 m high, until the Maastoren became the highest building in 2009 with 165 m. The new Erasmusbridge which was ready in 1996 gave Rotterdam a new symbol.

The city of Rotterdam is split up into 14 districts, each with a number of neighbourhoods. The districts are: