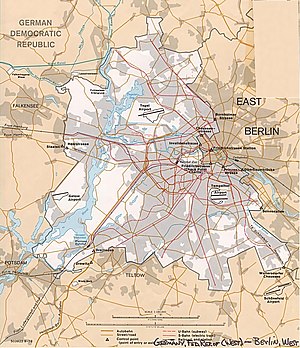 West Berlin was the name of the western part of Berlin between 1949 and 1990. It was the American, British, and French occupied sectors that were created in 1945.

In many ways it was integrated (joined) with West Germany, but it was not a part of West Germany or East Germany. The Soviet sector became East Berlin, which East Germany claimed as its capital. The Western Allies never recognized this claim. They said that the whole city was still under four-power occupation. The building of the Berlin Wall in 1961 surrounded West Berlin.

West Berlin was called "Berlin (West)" by the West Germany government, and usually German: Westberlin by the East German government. The east German spelling suggested that West Berlin was not really part of "Berlin" as a whole, but a separate place. East Berlin was officially called Berlin, Hauptstadt der DDR ("Berlin, Capital of the GDR"), or simply "Berlin," by East Germany.

The Potsdam Agreement of the four wartime allies decided on dividing up Germany. At first it was only a temporary measure, until a permanent way to reunite a peaceful Germany and Berlin could be worked out.

When the cold war began, the joint administration of Germany and Berlin broke down. Soon Soviet-occupied Berlin and western-occupied Berlin were managed by separate governments.

In 1948, the Soviets tried to force the western allies out of Berlin by a blockade of the western sectors. The Soviets blocked roads, railways and waterways, but the Potsdam Agreement guaranteed air corridors to Berlin. Because the western allies flew in all the supplies that normally came by land, the Berlin Blockade is also known as the Berlin Airlift. The Blockade ended in May 1949. By the end of 1949, two new states had been created out of occupied Germany - the Federal Republic of Germany (West Germany) in the West and the German Democratic Republic (East Germany) in the East - with West Berlin an enclave that was not part of either.

According to the western allies, the occupation of most of Germany ended in 1949 when the Federal Republic of Germany and the German Democratic Republic were set up. But the occupation of Berlin could only be ended by a quadripartite (four power) agreement, so Berlin remained an occupied territory under the formal control of all the allies. This is why the Grundgesetz (constitution of the Federal Republic) never applied in West Berlin.

The Soviets declared the occupation of East Berlin ended when East Germany was set up. This move was not recognised by the western allies who continued to view all of Berlin as a jointly occupied territory belonging to neither of the two states.

However, in many ways, West Berlin functioned as the de facto 11th state of West Germany. 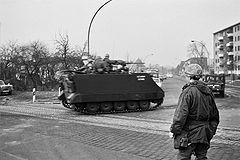 In 1969 U.S. military vehicles roar through rush hour traffic in the residential district of Zehlendorf, a routine reminder that West Berlin was still legally occupied by the World War II allies.

But the western allies remained the ultimate political authorities there. The allies could appoint the Mayor and city government at Rathaus Schöneberg, but they never chose anyone except the elected mayor.

There were differences between West Germany and West Berlin.

The years of division

Map showing location of the Berlin wall and crossing points

While West Berlin was separate from East Berlin after 1949, people could easily move between the two parts until 1961. In many ways Berlin worked as a single city. The U-Bahn and S-Bahn public transit networks, rebuilt after the war, spanned all occupation sectors. Many people lived in one half of the city and had family members, friends, and jobs in the other.

The Four Power Agreement on Berlin (September 1971) and the Transit Agreement (May 1972), helped to ease the tensions over West Berlin and made it a little easier for West Berliners to travel to East Germany and for Germans travelling along the road routes into the city instead of flying.

In the American Sector:

In the British Sector:

In the French Sector: