Occupation zones after 1945. Berlin is the multinational area within the Soviet zone

The Berlin Blockade was from 24 June 1948 to 11 May 1949. It began when the Soviet Union blocked railway and road access by the three Western powers (the Americans, British, and French) to the Western-occupied sectors of Berlin. The Blockade stopped after the Western powers used airplanes to airlift food and other things that people needed.

The Soviet Union began the blockade because they thought that monetary reform in the three German Occupation zones controlled by the Western powers which started on 21 June 1948 made the western parts of Germany too strong and wanted to force the west out of their occupation zone.

When the Allied Powers met at Potsdam they agreed to divide Germany into four occupation zones, American, British, Soviet, and French. They divided Berlin into four zones as well. Berlin was surrounded by the Soviet occupation zone, so the only way to get to the three western controlled sectors was driving through Soviet-controlled territory. 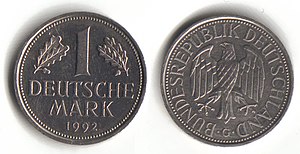 A 1 Deutsche Mark coin from 1992. The DM was Germany's official currency until it was replaced by the Euro in 1999.

The Soviet Union began the blockade because they thought the western half of Germany (controlled by the UK, USA and France) was becoming too strong, because one currency had recently been introduced throughout the entire western half - the Deutsche Mark. The Soviets were worried that a single currency would help the economy of the western half recovered quickly from the damage caused by the Second World War, and that this stronger western half would eventually develop into a country (it eventually did, called West Germany). The Russians wanted one Germany, without an army, that they could easily control. The Nazi invasion of the Soviet Union had killed one in seven Soviet people, and the Soviets feared that Britain, France and America might try to launch their own invasion at some point in the future. They therefore wanted as much land between them and France as possible, so that any major war would be fought in central Europe, and not in the Soviet Union where Soviet civilians might be killed (which is what had happened during WWII).

Germany also has lots of coal and iron near its border with France. The Soviets wanted to use the coal and steel to help rebuild their own country, but these resources woudl be difficult to access if the western half of Germany turned into a capitalist country that was allied to Britain, France, and the USA. If Germany was a single neutral country, gaining access to these resources would be easier because Germany could be bullied by the Soviet Union.

On 24 June 1948, the Soviet Union blocked access to the three Western-held sectors of Berlin. They cut off all rail and road routes going through Soviet-controlled territory in the United States. They also blocked routes by river and canal to the Baltic Sea. The Western powers had arranged a treaty with the Soviets guaranteeing the right to use the roads, railways and waterways.

The commander of the U.S. occupation zone in Germany, General Lucius D. Clay, wanted to send some tanks along the Autobahn from West Germany to West Berlin, with instructions to fire if they were stopped or attacked. President Truman said no, because that may start a war. Clay was told to ask General Curtis LeMay, commander of United States Air Forces in Europe, to see if an airlift was possible. General Albert Wedemeyer, the U.S. Army Chief of Staff, was in Europe when the blockade began. He had been commander of the American forces in India and China in 1944–45. He knew about the Allied airlift from India over "The Hump" of the Himalayas to China. He was in favour of starting an airlift.[1]

The first flight of the airlift was thirty-two C-47 cargo planes on 26 June 1948. They carried 80 tons of cargo including milk, flour, and medicine.

So many things had to be flown into Berlin that aircraft took off every three minutes.[2] If an aircraft missed its landing place it could not fly around the airfield and try again, it had to return to its base. This was easier and safer than holding up the aircraft following behind.

The Americans also recruited ex-Luftwaffe aircraft mechanics to help with maintenance, when the Allies realised that the blockade was going to last longer than the expected three weeks.[3] 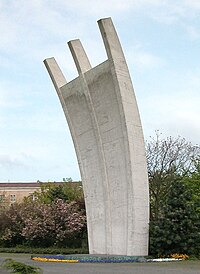 British, U.S., Australian, Canadian, New Zealand and South African pilots flew in the airlift. The French were fighting in their colonies in South-East Asia and could not spare many aeroplanes for the airlift. Instead they built a new and larger airport in its sector, on the shores of Lake Tegel. They completed the building in less than 90 days. Today it is the Berlin-Tegel International Airport.

Hundreds of aircraft, nicknamed Rosinenbomber ("raisin bombers") by Berliners, were used to fly in a wide variety of cargo, ranging from large containers to small packets of candy with tiny individual parachutes intended for the children of Berlin, were flown out of Berlin on return flights.

The USSR lifted its blockade at midnight, on 11 May 1949. But, the airlift did not end until 30 September 1949, because the Western states wanted to build up enough supplies in West Berlin in case the Soviets blockaded it again.

The three major Berlin airfields involved were Tempelhof, in the American Sector, RAF Gatow in the British and Tegel in the French. To keep everything safe, air traffic control was located at Tempelhof. A new four-power organization also started, Berlin Air Safety Center (BASC). BASC only closed down in 1990, when Germany was reunited and the ordinary German civilian air traffic control took over.

The British had about 150 C-47 Dakotas and 40 Avro Yorks. The RAF was also using 10 Short Sunderlands and later by Short Hythe flying boats. These flew Finkenwerder on the Elbe near Hamburg to the Havel river. The flying boats were designed to resist rust and water damage so were very useful for transporting bulk salt, which would have rusted the other planes. Many other aircraft were later used, and the British had flown in about 100,000 tons of cargo by the end of the blockade.

39 British and 31 U.S. pilots died during the blockade. There is a monument with their names in front of Tempelhof airport. Similar monuments can be found at the military airfield Wietzenbruch near Celle and at Rhein-Main Air Base

Tegel was developed into west Berlin's principal airport, and by 2007 had been joined by a redeveloped Berlin-Schoenefeld in Brandenburg. As a result of these two airports Tempelhof has been closed, whilst Gatow no longer serves as an airport and now hosts the Museum of the German Luftwaffe. During the 1970s and 1980s Schoenefeld had had its own crossing points through the Berlin Wall for western citizens.