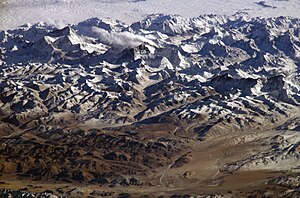 The position of the Himalayas mountain range

The 6,000 km plus journey of the Indian subcontinent before its collision with Asia about 40 to 50 million years ago

The Taktshang Monastery, also known as the "Tiger's Nest"

The Himalayas are a mountain range in Asia, the highest in the world.

They are north within Pakistan and Jammu and Kashmir, into the Republic of India's Himachal Pradesh and Uttaranchal states, State of Nepal, and the Kingdoms of Sikkim, and Bhutan; then into the south of China's Tibetan Autonomous Region.

The word "Himalaya" means House of Snow in Sanskrit, an old Indian language. The Himalayas are so high that they kept the Indian and Chinese people separate from each other most of the time. In fact, India is a peninsula that is cut off from the rest of Asia by the mountains. India is often called a sub-continent because it has water on three sides and mountains on the fourth.

North of the Himalayas is the Tibetan Plateau. It is called “the roof of the world”. However, the Tibetan Plateau is very dry because the plateau and the mountains act as a gigantic rain shadow. Similar to that, it has greatly influenced the climate of the Indian subcontinent. Not only does it block the extremely cold winter winds blowing from Central Asia from entering Subcontinent, it also forces the Bay of Bengal Monsoon branch to shed its moisture along NE and Northern Indian States, Bhutan, Nepal and Bangladesh.

Formation of the Himalayas

Geologically, the origin of the Himalayas is the impact of the Indian tectonic plate. This travels northward at 15 cm per year, and joined the Eurasian continent about 40-50 million years ago. The formation of the Himalayas resulted in the lighter rock of the seabeds of that time being lifted up into mountains. An often-cited fact used to illustrate this process is that the summit of Mount Everest is made of marine limestone.[1][2]

The Indian plate is still moving north at 67 mm per year. Over the next 10 million years it will travel about 1,500 km into Asia. About 20 mm per year of the India-Asia convergence is absorbed by thrusting along the Himalaya southern front. This leads to the Himalayas rising by about 5 mm per year, making them geologically active. The movement of the Indian plate into the Asian plate also leads to earthquakes from time to time.

The Himalayas is very popular for tourists because it has a lot of wild life. The types of plants and trees, which are common in the place, are Oak, Pine, Fir, Rhododendron, Birch, Juniper, and Deodar. Common animals, which are seen mostly in the different parts of the Himalayas, are snow leopard, blue sheep, musk deer, tigers, elephants, wild boar, and crocodiles. Even endangered species of animals and plants are also found there. In the north part of the Himalayas where the temperature falls below freezing point, animals cannot survive well. However, those who adapted can survive. During the cold winters most of the animals migrate to the lower regions of the Himalayas while others like the brown bear hibernate instead. The Yak is mostly seen in the cold desert.[2] They are like wild ox and they are the largest animals in this region. In regions of Ladakh animals like Nyan, the wild and the most largest sheep are found.[3]

Some of the major places for wildlife attractions in the Himalayas are:

The five main rivers of the Himalayas are the Jhelum, Chenab, Ravi, Beas, and Sutlej. The rivers are the main source of human and animal life in those areas.[3]

The river Jhelum came from a spring called Verinag, which is 80 km south of Srinagar. It is known world wide for its nine bridges. It is a very wide river and the water is quite muddy and dirty due to pollution etc.[3]

The two rivers Chandra and Bhaga come together to form the Chenab River. The Chenab is in the Lahaul region of Himachal Pradesh. It came from the melted snow that was on the foot of the main range of Himalaya in the Spiti and Lahaul district. The lake of Chandra Tal also comes from these rivers.

This river has come out in many love legends. The town of Chamba is on a mountain shelf on the right bank of the river. The region is famous for handicrafts like embroidered handkerchiefs, silver and leather craft and woodcarving.[3]

The valley of Kullu and Kangra is formed by river Beas. The main force of this river is from the south of Larji.[3] There it enters the Mandi district and further still into Kangra. Its water increases to a great extent during the monsoon season so much so that it causes floods in the villages around it. The Pong Dam is made on the river to get hydroelectric power supply.[3]

River Sutlej comes from the southern slopes of the mountain Kailash, near the lake of Mansarovar. It flows parallel to the Himalayas and in the end goes to the Shipki pass. It cuts through the Zanskar range, and makes a deep well part at the base of the Kinner Kailash.