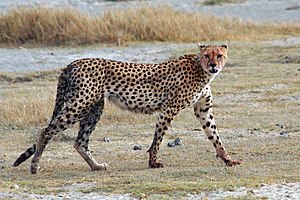 A cheetah is an example of an endangered animal.

An endangered species is a group (population) of plants, animals or other organisms that is in danger of becoming extinct. This could happen because there are few of that animal left, its predators have grown in number, or the climate that it lives in is changing, or the places it lives in have been destroyed. The World Conservation Union (IUCN) has worked out that endangered species are 40% of all organisms.[1]

Some of the animals that are listed as endangered are: